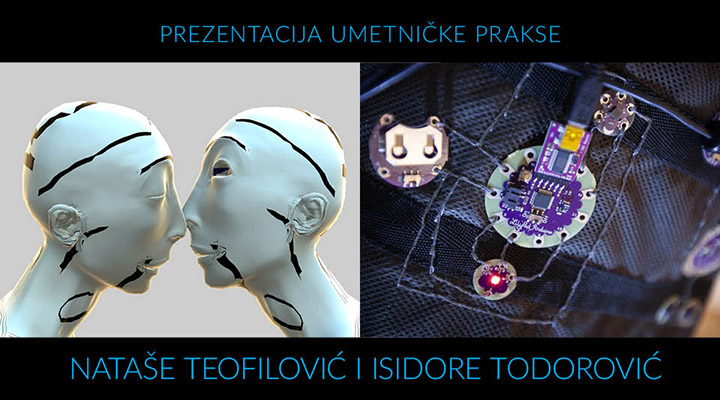 Using new technology in artistic practice has been present in Vojvodina since the first experiments performed by conceptual artists, work by Bogdanka Poznanović and her Visual Studio for Intermedia Research (1979), which developed into, first a curriculum, and then the Department of New Visual Arts at the Novi Sad Academy of Arts, the only of its kind in Serbia. Numerous female artists are associated with the Faculty through their education and work, in addition to the Interdisciplinary Graduate Studies Faculty in Belgrade - group for Digital Art, whose founding was significantly helped by an artist and a mathematician Marica Radojčić. Also, independent organizations, such as "VideoMedeia," "kuda.org," "Napon," "Share," "Visart," and others, which have encouraged the development of media practice in Vojvodina with a variety of programs, as well as Museum of Modern Art Vojvodina (MSUV), which has adjusted its internal organization and program activities to new art trends, and had founded its Center for Intermedia and Digital Art in 2013, which deals with various types of technological art practices, such as: video, computer art, digital art, electronic art, internet art (net, web art), interactive, kinetic, sound and/or light media installations and ambients, robotic art, animations, virtual reality art, video-games, etc.

As part of the exhibition "Acquisitions: Purchases and Gifts (2012-2015)" by the Museum of Contemporary Art Vojvodina, numerous female artists are represented, including:

Nataša Teofilović, explores the world of digital art, converging art, science, and technology. Technically speaking, she delves into various media, from experimental video, through 3D character animations, and digital ambients. Conceptually, her works consolidate subjects of identity in a void virtual space, perception of virtual beings, and examines the boundaries between the virtual and real space.

Isidora Todorović, completed her undergraduate and MA studies at the Department of New Visual Arts at the Novi Sad Academy of Arts. She also works as the Assistant Professor at the same Department. She is a fan of biopolitical theories, post-feminism, and "do-it-yourself" culture. She surrently writes articles on anonymity on internet and creating political games.