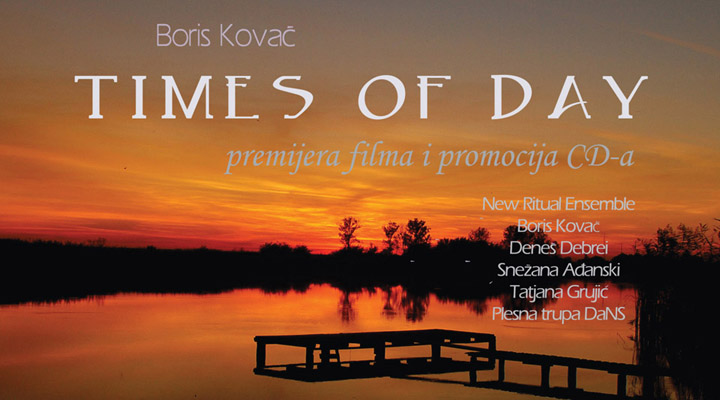 Film Times of Day was made after a music composition of the same title, a concerto for saxophone and chamber orchestra, performed by the author and his New Ritual Ensemble. The film was createdby Boris Kovač, Deneš Debrei, Snežana Ađanski i Tatjana Grujić, and it is based on contemporary dance expression interacting with Vojvodina outdoors, experienced during 4 striking times of day. Morning, noon, evening and midnight represent both four parts of the music score, as well as four subject matters of the film. Performers include Deneš Debrei, Snežana Adjanski, Boris Kovač and a dance group DaNS. Cameraman Ivan Milinkov Vanjus, film editing Boris Kovač and Zlatko Zlatković. Production KACAHARA MM Studio.

CD Times of Day has been recently released by the legendary ReR Megacorp (Recommended Records).
This composition brings us a contemplation of 4 striking times of day, weaving the texture of one and the same but always different intimate music ritual.
Music sufficient for a single day in a life or for the entire century...

Boris Kovač (1955) is a composer, performer, multimedia artist. He holds an MA in Philosophy from Belgrade University. All his full evening concerts have been staged over 500 times, including performances on 250 contemporary music and theater festivals in some 40 countries on 4 continents. He has 18 auctorial CD albums and a DVD, four released in England, Germany, and Serbia, each, two in Canada and Italy, and one in Russia and Austria. He composed music for dozens of theater and dance performances, as well as film and TV productions in Serbia, Slovenia, Austria, Germany, and Hungary.